art in a pinstripe suit

Who's Who at Artnet

prints as an investment

what is an original print?

Born in 1936, Patrick Caulfield CBE RA was not only of the Pop Art generation, he was at the Royal College of Art with many of the better-known British painters of that era, including Hockney, Kitaj and Allen Jones. But, as he has carefully explained on many occasions, he is not a Pop artist himself, although his use of heavy black outlines at one stage gave his work a superficial resemblance to the comic-book classicism of Roy Lichtenstein. Nor does he really belong to any other known category of art. From the start, he was quietly rebellious. English art of the 50's, when Caulfield was growing up, was overly earnest - either in the wispy Euston Road realist fashion, or passionate or geometric abstract way. Caulfield wanted neither. "I thought I'd like to do something decorative, which was a bit of a dirty word in fine art," he says. "It wasn't considered correct. Decoration was something you left to interior decorators. I didn't want misty, tortuous, tentative Englishness. I just wanted it to be very clear-cut, straight forward and simple." His art was a drama without actors, played out in interiors where some past or future action is silently condensed. These might be bars, foyers, hotel rooms or restaurants deserted between sittings of lunch and dinner, but he could set the human scene with a single still life. 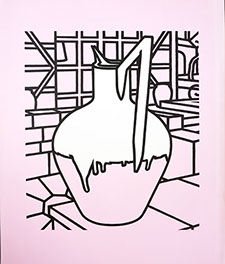 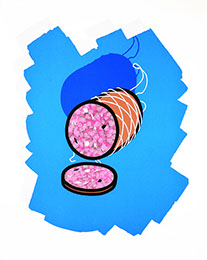 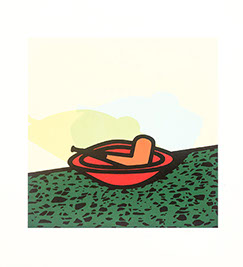 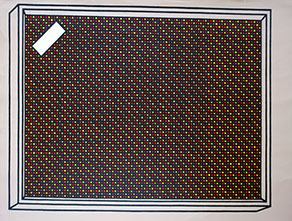 to purchase any of these works, please click on the image (above)